Renowned Nepali social activist Indira Ranamagar visited HCC youth home Khushi Ghar to speak with HCC students. With a similar background to many of our students, Indira offered inspiring words, only further fueling our students’ energy to make a difference in the world.

Born into poverty in rural Nepal, Indira was prevented from attending school as a child due to her gender. Instead, she taught herself the basics while sitting with her brothers as they did their homework. She practiced her letters by scratching them in the dirt outside with a stick. Eventually, she was allowed to attend school and graduated at the top of her class. She moved to Kathmandu and became a teacher. It was in Kathmandu where she became acquainted with Bishnu Kumari Waiba or Parijat. A famed Nepali writer and advocate, Parijit fought for the rights of political prisoners. It was through this work that Indira learned the ins and outs of the Nepali justice system and became interested in prisoners’ rights. 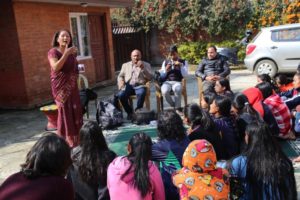 In 2000, she founded her own NGO in Nepal, Prisoner’s Assistance Nepal. She works to provide safe, supportive lodging and education for children whose parents are imprisoned. Currently, Prisoner’s Assistance Nepal runs 4 youth homes, 2 schools and dozens of other sundry projects. In a recent interview with the BBC, Indira estimated that she has helped 1,600 students so far. She has won many awards for her activism work, including the World Children’s Honorary Award, presented to her by Queen Silvia of Sweden.

Upon her recent visit to Khushi Ghar, Indira gave a lecture for HCC students, sharing her personal story about her upbringing, finding her true passion with her NGO, and even some of the challenges she faces today as an activist. Many of the students saw themselves in her, with many sharing her poor, rural background. Students were left incredibly inspired and empowered, excited to keep working to become community leaders.

Thank you, Indira, for visiting us and sharing your story. Thank you most of all for the incredible difference you make every day in the lives of Nepali children, inspiring the next generation of leaders around the world.